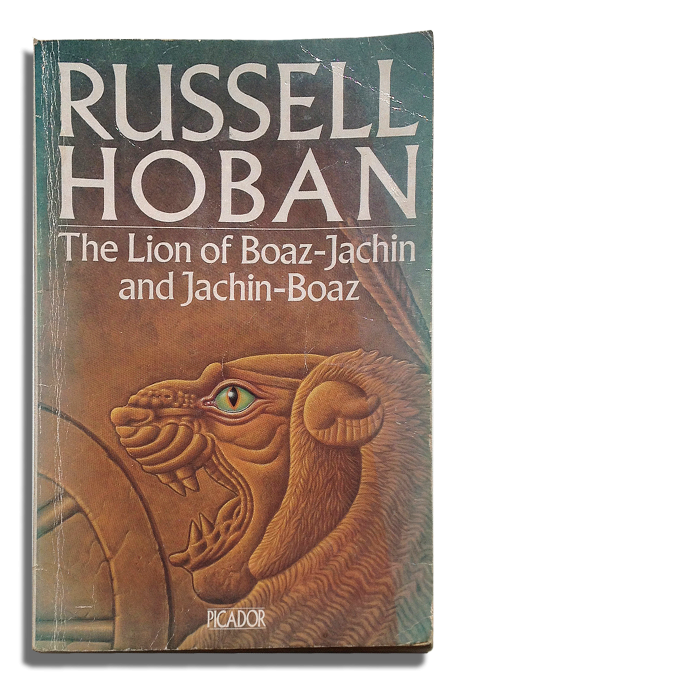 We're starting a new feature where we're asking designers to pick one book (about design or not) that has had an impact/inspiration on the way they design/work. We've started by asking a few friends but the series is open to any of our members. Mail us telling us what the book is and why you picked it and we'll post it in your name.

First book choice is from David Joyce from Language:

The Lion of Boaz-Jachin and Jachin-Boaz by Russell Hoban. I was introduced to this book while doing my masters in St Martins in the early nineties. It was suggested to me by a tutor who had a knack of being able to tell what would engage my imagination and ultimately help me along. In a way he reflected the characters in the book. He was my navigator, my map maker, my gentle guide. I was struggling at the time, trying to deal with complex ideas. It was one of those times where you feel lost and you don't know where you are going and what to do next. I tossed a coin to see if I would stay or if I'd go. I stayed.

Russell Hoban was born in Pennsylvania in 1925. He worked as a book illustrator before becoming a writer. In 1958 he began writing children's stories. This novel was first published in 1974 and was his sixth book for adults. The book is set in a future where no lions exist. A map maker who is going through a mid life crisis leaves his family to embark on a journey of discovery. He brings with him a map that he made for his son which shows how to find everything. His son decides to follow him and magics a lion back into the world to stalk his father. What unfolds is an adventure that paints wonderful images on every page. Here was a story unfolding on paper that in a lot of ways reflected the situation I found myself in. It blew my mind!

He thought like an illustrator. I started to feel ideas connecting and making sense within the body of work I was developing. It helped me create my own map which has stayed with me ever since and informed the way I work. His playfulness in his use of language led me to Joyce, Heaney and Flann O'Brien – but I had to go to a desert somewhere in the Middle East to get there. It thought me about the virtue of playfulness in telling stories. What connects us as human beings and what really matters as communicators. It fizzled and roasted and smelled of burning sand. My thesis became a document of my experience which in turn became about feeling lost and found again. It was a time of invention and reinvention. This book gave me a suit of clothes that I could jump into that felt right and warm to me.

‘Everything was lion-coloured, low, tawny, broken, preserved in forgotteness, found so that its lostness might be fixed and made permanent, fenced-in, broken toothed, stripped naked of time and earth, humbled, refusing to say a word.’

Thank you for reminding me of this. I will read it again and I'm sure I will get something completely different out of it.