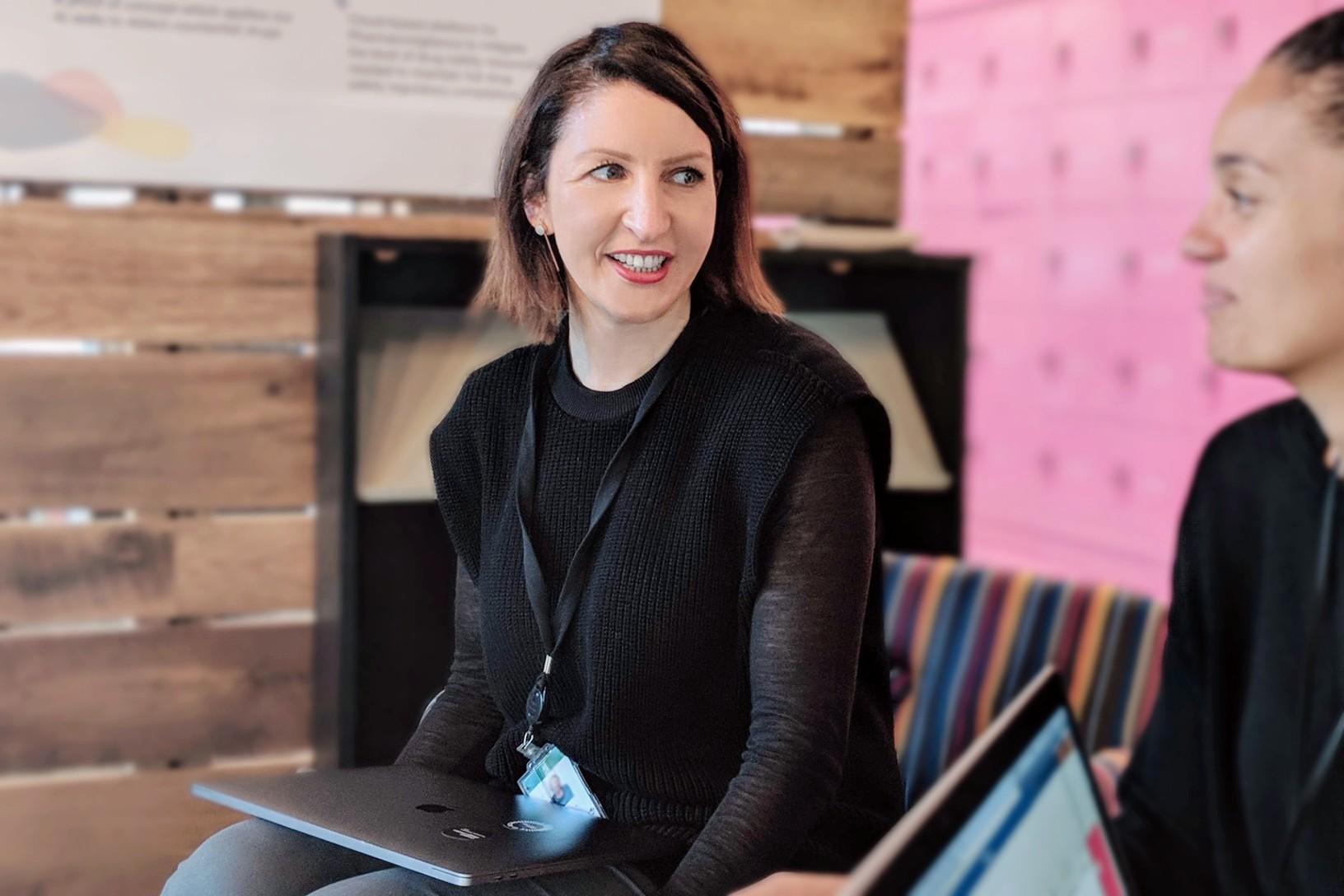 Third in our Designer as Collaborator series, we chat to Grace Hughes – Senior Content Designer for Fjord at The Dock, Accenture’s R&D hub in Dublin. As Grace puts it, her work unfolds in that beautiful, messy intersection of people, language and technology.

Grace, it seems that the role of content designer is becoming more important and common in the design world.  How did you end up in this role and how has the discipline evolved since you began?
I didn’t realise it at the time, but I actually began my career as Content Designer when I was working for the airline CityJet, which was owned by Air France. I was creating French language training content for a remote learning website with Russian web designers. I then worked as a freelance writer for the design agency Each&Other, before becoming a copywriter in advertising and marketing. Fjord and the design world came calling, and I joined The Dock in 2016. I've been exploring and experimenting in this global R&D hub since then.
The emerging field of Content Design has evolved rapidly over the past few years. Instead of being divorced from the design process, we’re seeing growing appreciation for a focus on content throughout the entire effort. In the industry, there’s an acknowledgement that the way we communicate and the language we use has a huge impact on user experience. Many product and service design teams are hiring content designers and UX writers and I think this commitment to the discipline will grow stronger, especially in the context of conversational design. What a time to be alive!

What kind of projects do you work on at Fjord?
As I’m on a small (but expanding) content design team here at The Dock, I’ve had my fingers in a lot of pies, since starting with Fjord. I’ve got stuck into design research and UX writing, as well as some good, old-fashioned storytelling on different projects. My job means getting my head around complex technologies and systems, and being an advocate for simple, human language. The Dock is a super-interesting place to work, it's a place where different disciplines, technologies and expertise come together. As a global R&D hub for Accenture, we get the chance to work on diverse projects across a variety of industries. One of my favourites was helping to create a digital identity prototype in conjunction with ID2020, an organisation backed by the UN and dedicated to helping the 1.2 billion people in the world without a means of identification. I also worked with a team of software engineers to create a prototype for a voice assistant in a theme park setting, complete with voice-activated sparkling cauldrons. Other work involved designing content to convey some in-depth research around people’s attitudes and behaviours concerning the Future Home. Early this year, the wonderful Lynn Harding joined me on the Content Design team! I’m excited to see how we can build and push the boundaries of the discipline.

Do you ever need to prove the value of content design to the rest of your team or the business? If so, how do you go about it?
I see Content Designers as being the keepers of the story and its structure within the project. As part of an emerging field, I often need to promote and prove the value of the discipline. Human-centred design is a key consideration as technology advances. I believe this must extend to the content as a central part of the user experience. In a world where we’re constantly being being bombarded by crap content, the message content designers craft needs to be super impactful. A content-first approach becomes even important as we move towards conversational design, where language is the interface.

How do content design and UX design relate to each other?
Content can make or break the user experience, and so it should be a key consideration in the design process. In my experience, there is some overlap between content and UX design skills and activities. At certain stages in a project, we’re working together on the same activities – like design research, for example. But the content designer will bring a specific lens to this activity, like a focus on language. At other times, the role will be a little more exclusive, like when the content designer is dedicated to an activity like UX writing.

Finally, what do you think is the most important skill for designers today?
I believe in a collaborative approach to Content Design, and sharing the skill and tools that help us to create great content. As technology advances, I believe that designers will need to be even more collaborative, which means being open and receptive to other disciplines. I think our greatest skill as designers is to listen to our users, and to each other. I love this quote from John Maeda: ‘I like to tell designers that their job isn’t to be storytellers, but to be story-listeners — people who take the time and energy to listen to each others’ stories.’