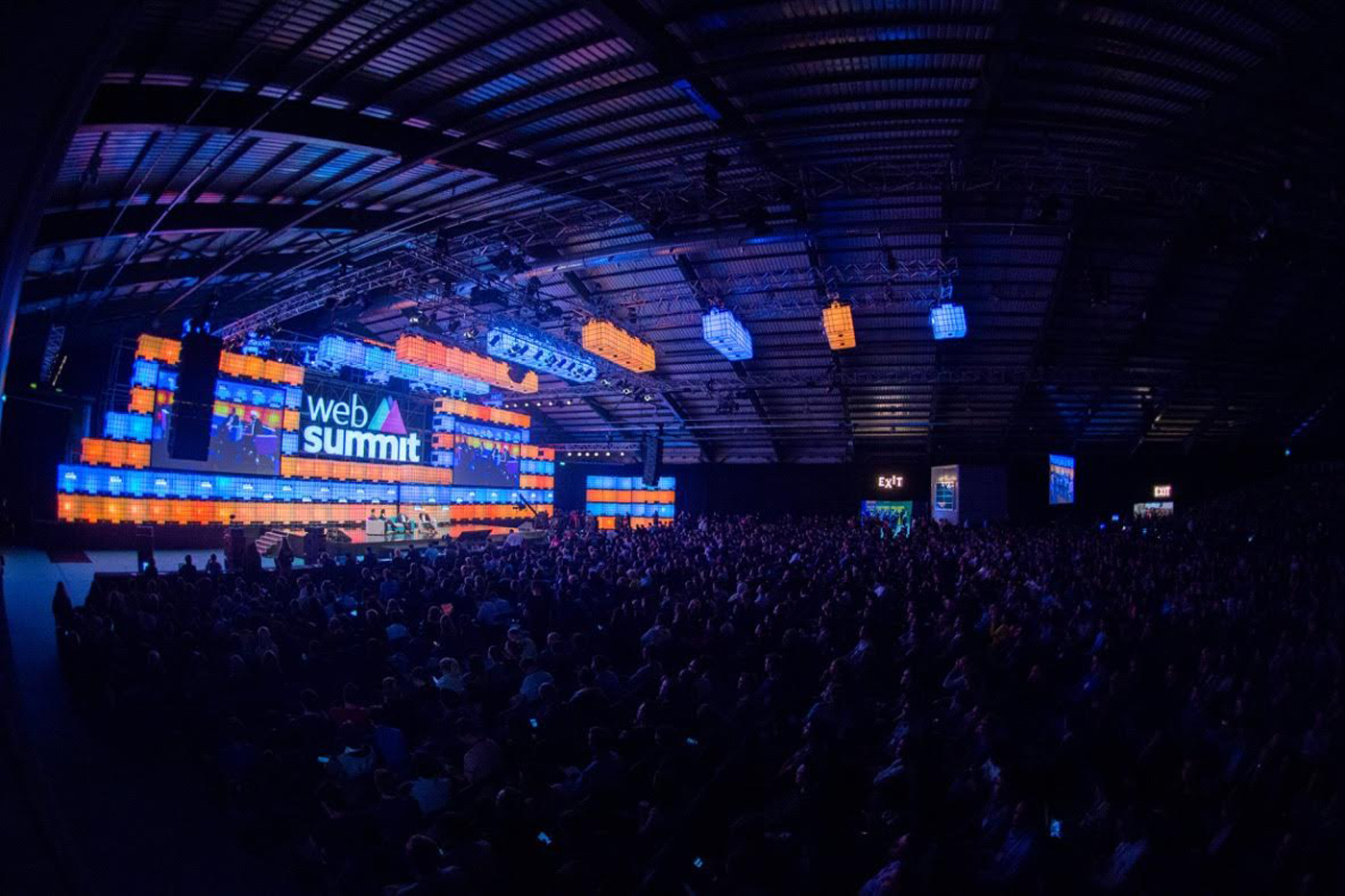 With more than 40,000 people from all over the world attending its sold out final outing in Dublin last week, designing the Web Summit – along with a host of other conferences around the world annually – can't have been an easy job for the Summit's in-house team. Take into account that this is a team of only four people and it becomes even more mind-boggling. We caught up with Lukasz Kulakowski, Amy West, Dargan Crowley-Long and Hanah Vickers to find out how they tackle the daunting task and how they prepared for Ireland's final Web Summit…

In the five years that the Web Summit has been taking place in Dublin, the event has grown massively in scale, number of attendees and profile. The announcement of its move to Lisbon next year was met with mixed reactions, but for the design team, the new location won't mean a massive change in approach or output. 'We want our identity to be universal: the Web Summit brand is already recognised around the world and is not based on references to culture, country or ethnography. Rather, the brand is associated with the subject it addresses: the technology industry,' says Lukasz. While the Web Summit caters to a varied – and very large – audience, it is tech that unites them all. According to Dargan, 'We have up to 16 different types of attendees at any of our events – Speakers, Startups, Investors, Founders, Partners and many more – all of whom are in some way interested in or related to tech. While we try to create identities for each of our conferences that are memorable graphically, we try to design each conference to aid the experience of each and every attendee.'

The process over the past five years has involved a steep learning curve, learning from and about their attendees, and shifting the focus from hammering home an identity to creating a system that works for the people it needs to: 'Web Summit’s identity has grown with the company itself. When it began we needed a quick logo that would put a stamp on something that was getting on its feet. Then Web Summit scaled from an event of 8,000 in 2013 to an event of 22,000 attendees in 2014 and we learned a lot at that time. A major lesson was the need for a much clearer and easier-to-use identity system that served to inform and direct attendees and enhance networking experiences, rather than trying to impose the logo on everyone. They already know they’re at Web Summit, we don’t need to keep telling them!' Amy points out.

It was at this point that the team put a lot of time and research through feedback and workshops into developing an over-arching system, not just for the Web Summit, but for all the events the team works on. It was first put into action at Collision in the US in May of this year, refined and redrafted for RISE in Hong Kong in August and was well-oiled in time for this year's Web Summit here in Dublin. According to Lukasz, 'Each event has unchangeable elements. These are all the banners, booths, name tags, wristbands and a large number of small elements such as all kinds of stands, showcards and tent cards etc. Through tests we were able to build templates where all these elements are systematised. For example, we need to design nametags for our conference. Through all this work we have determined what size they have to be, what kind of material to use and where best to place the information. After each conference, we analyse our projects and seek feedback from associates and attendees.' Dargan continues, 'We developed an efficient wayfinding system, easy-to-read name tags at the perfect lanyard length, startup boards with good hierarchical treatment for viewing within crowds and easy-to-navigate maps. We did all this so the attendee experience can become as seamless as possible and they can spend more time networking than trying to find their way around.'

Now that the Web Summit is done for 2015, does the team get some time off? According to Lukasz, there's a chance for a little rest, but then it's right back to it: 'We have a Surge in India in February, Collision in New Orleans in April and Rise in Hong Kong in May, although thankfully we are about 90% there with the branding work for those. Now my team have a few days off to recharge the batteries, then we have November and December marked out to work on a new branding project that will be unveiled next year…'

And all this from a core team of four, with some collaborators along the way: 'At major events like Web Summit we can count on freelance support to work with us. There are also separate UX/UI and Engineering Teams that specialise in mobile applications and websites for our events and we work with them very closely,' explains Lukasz, who heads up the design team. Along with collaboration, he believes in sharing responsibilities among all team members and communicating clearly with everyone. 'We do not duplicate the advertising agency structure of junior/senior roles. I think that even new starters can easily take responsibility for an important part of a project – with the right support from more experienced designers in the team. This, to me, is the best way to learn.'

This year's Web Summit saw its biggest attendance yet, with more than 40,000 people from all over the world descending on Dublin for three days of talks, events and networking and a further 40,000 watching the live stream around the world. Registration for 2-for-1 tickets for next year's Web Summit – in its new host city of Lisbon – is already open.