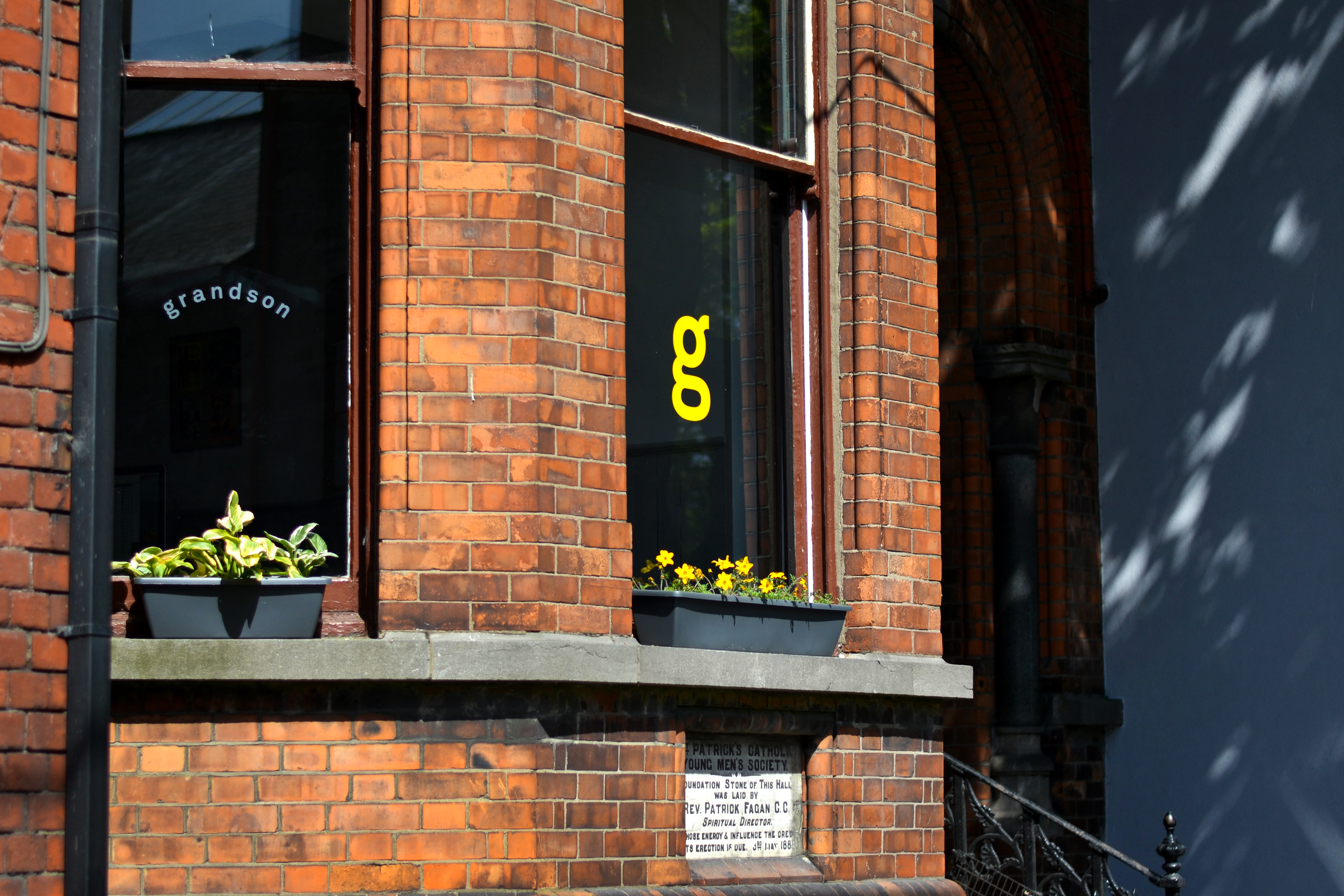 This month's cultural picks come courtesy of Dundalk's finest, Grandson. Killian and Jake have combed through events, exhibitions, tunes and more so that as the evenings get longer, you have plenty to fill them with. Without further ado...

FAKE Exhibition at the Science Gallery FAKE digs deeper in to some of the concepts around imitation, artifice and fiction that are explored in the main exhibition. Loads of interesting events to choose from. (See website loveliness)

A Look at Louth This programme of films from the IFI Irish Film Archive features a host of stories made in and about Louth from 1897 onwards, including the earliest flickering images of Drogheda taken from a moving train the Lumière Brothers.

Sound Advice | The Worlds Best Ever  Always worth a random dip.

Beats In Space Never not good.

Adam Buxton  A solid studio favourite, from the 6Music days with Joe Cornish and their tv show –  but these solo ones with Adam are always brilliant. Some episodes of note – Any of the Louis Theroux ones, Jonny Greenwood, Richard Ayoade, Tim Pope.

Joe Rogan Podcast with Billy Corgan is interesting, and his episode with Chris Kesser predicts that by 2040 in America,100% of the federal budget will go towards health care spending.

Atheletico Mince with Bob Mortimor is mental, but when its good, its hilarious.

Design Matters with Debbie Millman, in conversation with Massimo Vignelli  Then go check out the Vignelli Canon and then sure why you’re on that vibe – Go look at this article about Saul Bass.

Epicly Later’d Filmmaker Patrick O’Dell explores the careers and lives of some of the most influential people in skateboarding--and in the culture at large. Some of our favourites –  Geoff Rowley, Ed Templeton, Spike Jonze, Heath Kirchart, Dylan Rieder.

Manhunt – Unabomber  When you’ve watched it and been enthralled, listen to this podcast with the FBI profiler.

Chef’s Table The episode on Grant Achatz is insanity.

King Of Kong – A fistful of quarters American documentary film. Highlighting the popular 1981 arcade game Donkey Kong, it follows Steve Wiebe in his attempts to take the world high score for the arcade game from Billy Mitchell, whom the film presents as reigning champion.

The Archive  Paul Mawhinney has amassed what has become the world's largest record collection. Due to health issues and a struggling record industry Paul is being forced to sell his collection. Read this article after.

The Bowler Meet Rocky Salemmo. He’s a ramblin’ gamblin’ man. For the majority of his adult life Rocky has hustled bowling for a living. Here is his story. A short documentary about booze, broads and bowling.

The Trip Steve Coogan and Rob Brydon as fictionalised versions of themselves on a restaurant tour of northern England (Season 1), Italy (Season 2), and Spain (Season 3). Fantastic scenery, food and impressions.

The Confession Tapes When is a confession not a confession? When it's involuntary, coerced or downright false. Those are the claims made by the subjects featured in this true-crime series.

Comedians in Cars Getting Coffee Refer to title.

No Hitter – The Dock Ellis Story In celebration of the greatest athletic achievement by a man on a psychedelic journey, No Mas present the animated tale of Dock Ellis' legendary LSD no-hitter, who later went on to be an advocate for sobriety. The animator, James Blagden also worked on a Tribe Called Quest doc on Netflix.

Bompton: Growing up in Compton  Kendrick interviewed where he grew up.

One of a Kind: The Rise and Fall of Stu Ungar He was the Jim Morrison of the casino,dropped out of high school to become an underground card-table sensation, bankrolled by the Genovese crime family.

Pathways - Irish Routes to the Art of the Matter A documentary about successful Irish creatives who are making it abroad. It uncovers the story of how they got there and looks at where and when the seeds for their success were sown.  Featuring a legend we recently had the honour of hosting recently – Brian B+ Cross.

Art and Copy is a powerful new film about advertising and inspiration.  Directed by Doug Pray who also did Infamy.

Make It Now – Anthony Burrill The best design book I’ve read – simple, positive, proactive. (Buy it here rather than off the other guys) He’s responsible for The Observer’s recent cover accompanying an article on the ‘cult of being kind’, and here’s his latest crowdfunded book on Volume.

Now You See It and Other Essays on Design, Michael Bierut

Logo Modernism  The bible. Examine the distillation of modernism in graphic design with this vast collection of approximately 6,000 logos from 1940–1980. Logo Archive is another brilliant online resource.

Herb Lubalin (Unit Editions) and the most recent archive, updated daily, Lubalin 100 and his Eros and Avant Garde work

Victory Journal  Always good and produced by the team at Double Day & Cartwright / Grotesk who recently worked with Tom Gould and Thirstin Howl on Bury Me With The Lo On.

1000 Things by Ana Koveces  Amazing / educational kids book by one of my favourite illustrators Ana Kovecses.

The Age of Innocence – how football became part of pop culture in the 1970s, but retained a certain purity

Geoff McFetridge Simple and harmonious art produced by a really interesting and inspiring guy with a cool creative process.

Kaws If you find yourself in Tokyo or Hong Kong this month – constantly fresh and clean, produced in one of the nicest art spaces we’ve ever seen.

Cody Hudson  Beautiful shapes and colors from the man behind Struggle Inc and Land and Sea Dept  new show this month in Amsterdam’s MiniGalerie – here's an insight into his process  and his need to produce something even if no one sees it. He works as a designer and artist, but is also a part of a michelin star restaurant.

Gerd Fleschman on RTE Archives discussing Irish dancehall posters, featuring some of these Muckross Poster Collection which links to this.

The Spirit Store, Dundalk, named by The Guardian as one of the best small pubs in the world, this pub is down on the docks in Dundalk facing the mountains and sea, great selection of beers, and amazing Sheridans Cheese Board (when you get the right barman). David Kitt plays there on 8 April – new record on All City Records is great.  P. Frawleys, Lahinch, Co.Clare, Trevor Finnegan from OurType put us onto this one, has 4 seats and serves only Guinness. Clarkes Bar, Drogheda –The definition of snug. Teach Ósta, Inis Meain – The best pint of Guinness in Ireland.

We have our own football league in this country – called the League of Ireland.  There are live games every week around the country and we would encourage people to go experience #terracesnottv.

Matty Matheson, How to make the best pancakes (My kids' favourites)  – and check out more Matty here

Nathan For You – The Anecdote Watch a person go to great lengths to create the perfect talk show anecdote.

Scroobius Pip with Limmy episode – at one point I nearly exploded with laughter.

Anything from Will Robson Scott is worth a watch.

Tales By Light – Uniting exploration, photography and the natural world.