Print, Practice and the Polls 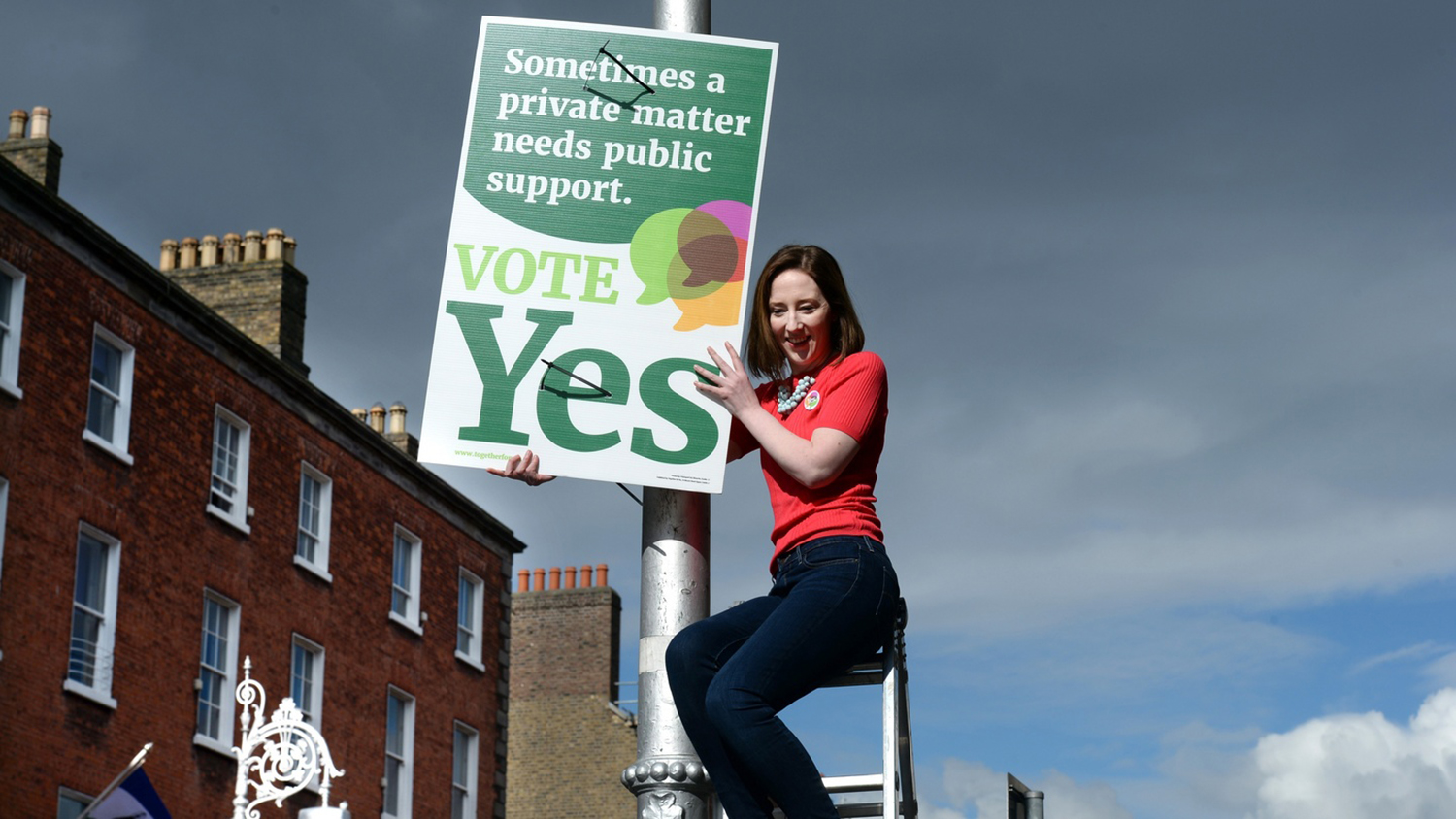 Design has a unique capacity to reflect our changing values. Design’s relationship to consumption — whether viewed positively or otherwise — means the outputs of the design industry can show us quite clearly what we want and desire, our buying patterns, or trends in commerce. In the 100 Archive a proliferation of identities for cafes mimics our ever-growing love of coffee, vinyl has returned to the 100’s collections as it has to our music shops, and the trajectory of locally-sourced food and drink is as traceable in the 100 as it is in our cupboards. But design can reflect deeper and more meaningful changes in our society too, and these hard fought-for changes are visible in the work submitted to the 100 Archive. Arguably the most significant moments in Irish society in the past ten years have been our two rights-driven referenda: the referendum to introduce marriage equality in 2015 and the referendum to repeal the Eight Amendment, ending Ireland’s abolition of abortion, in 2018.

Yes Equality sits alone in the 100: it is the only project submitted directly relating to — or even indirectly referencing — the 2015 referendum on marriage equality in Ireland. When you consider some of the potent imagery associated with the campaign, such as Joe Caslin’s mural on Dublin’s George’s Street, Maser’s YES on the facade of Project Arts Centre, or Annie West’s illustration of the hoards coming #hometovote, it is interesting that, in terms of communication design relating to the referendum, or at least the design that’s visible in the 100 Archive, the identity for the official Yes Equality campaign appears to be the beginning and the end.

In an interview with the 100 Archive in 2019, David Joyce of Language, the studio responsible for the identity (designed by Adam May and Emma Conway, informed by research by Catalyst) explained the identity not as a singular moment but the result of decades of work, and not a fixed output but something passed on to many others to mould through use. ‘The relationships that were there for many years, working on various different projects with different outcomes came together under this umbrella, which was essentially about a collective energy. It was a collective energy within the studio, the whole studio was involved in the process of making the identity. But it was not only about people in the studio working on it, it was also this idea of handing it over to people outside to run with it.’

He continues, ‘And that was the amazing thing about that campaign, we have photographs of people making their own posters, people crocheting things, knitting things, from all over the country and all over the world. The identity wasn't set up in a graphic design-y way, rather it was made to be malleable and be used by anybody. People took it and ran with it.’ It is therefore particularly apt that in the project credits listed on the 100 Archive, Language include the 1,201,607 who voted yes. Many of these 1.2 million yes voters used and appropriated the Yes Equality identity, and arguably all gave it the impact the design has when viewing it now.

Where the Yes Equality identity sits as a lone representation of the 2015 marriage equality referendum in the 100 Archive, Language’s identity for Together for Yes (designed by Adam May, Cliodhna Meldon, Amy Heffernan and Dearbhla Kelly) is different. The official campaign to repeal the Eight Amendment in 2018, Together for Yes is joined by a number of independent projects looking to support the campaign through advocacy, fundraising or visibility. Another such ‘official’ identity is Jennifer Leahy’s identity for Women’s Health in Ireland, a cross-professional, cross-political organisation formed shortly before the 2018 referendum, formed with the sole objective to secure a yes vote.

Interestingly, submissions relating to the Eight Amendment are not limited to 2018. ‘Women to Blame’ is an exhibition held in 2014 presenting a record of the events before, during and after the Eight Amendment was made to the Irish Constitution. Also submitted long in advance of the announcement of 2018’s referendum is ‘Bodies Awakened’, a 2016 project by Cliona Ni Laoi, employing design, video, poetry and guerilla tactics to ‘speak out against oppression and to fight for women’s rights’.

Alongside the Together for Yes identity, design projects created in 2018 included posters, publications and digital materials. A number of submissions centre around three exhibitions. One made an unintentional but no less powerful connection to the referendum, entitled ‘Print, Protest and the Polls: The Irish women’s suffrage campaign and the power of print media, 1908 – 1918’ curated by Donna Gilligan and held at the National Print Museum from the month of the referendum onwards. While planning for the exhibition began in 2017, an opportunity to reflect a contemporary response to the exhibition came in the form of three commissioned limited edition prints by Mary Plunkett, Dave Darcy and Jamie Murphy, at which point the referendum had been called. All three prints feature in the 100 Archive, with the latter two making direct reference to the referendum.

The other exhibitions featured in the 100 Archive made a direct connection to the Together for Yes campaign by fundraising for it: ‘The Art of Protest’, led by Katie Kidd and Avril Delaney and ‘Freedom’, organised by Peachy Dublin. In both instances, various artists and designers were invited to design limited edition prints relating to protest and the Eight Amendment, the sales of which contributed to Together for Yes. Prints for ‘The Art of Protest’ submitted to the 100 Archive include ‘Haiku’ by Jo Little and Kate Brangan of Or Studio and ‘Suffer’ by Shauna Buckley of It’s Okay, while Eric Lynch’s ‘Deliverance’ was created for ‘Freedom’.

Kidd and Delaney, in addition to organising ‘The Art of Protest’, created a publication entitled ‘Vote for Women’, with practical information on registering to vote and straightforward information explaining why a vote for repealing the 8th was a vote for women’s wellbeing, safety and healthcare. The publication made a connection to suffrage, evoking the iconic imagery from the Suffragette era through contemporary photography.

This drive to add their voices to the public conversation on the Eight Amendment and to move others to do the same is evident in other projects, too. ‘The Eight’, a motion design piece by Noelle Cooper and Chris Fullam of Unthink, is a simple looping animation which the studio shared on social media, designed both to communicate their desire for the Eight Amendment to be repealed and as an encouragement for others to vote in favour of repealing. FAC Magazine invited creative responses to the referendum for a special issue, including a poster, again designed by Eric Lynch.

It can be a challenge to accurately reflect the impact design has in movements for social change, where we can risk either under- or overstating the role it plays. It is not the starting point of a movement, but can help encapsulate it and communicate it to wider audiences as it builds momentum. It isn’t the message, but can clarify that message and in doing so strengthen it. It can refine and give the sense of a singular voice, or in the case of the multitude of Repeal-related projects in the 100 Archive, can help to diversify the voices contributing to a broad discussion. It’s not the engine pushing a movement forward, but in the case of these major, but fleeting, referenda campaigns, it embodies significant moments long after they’ve passed. To paraphrase Clio Meldon about her work on Together for Yes, it doesn’t make the change, but it helps.