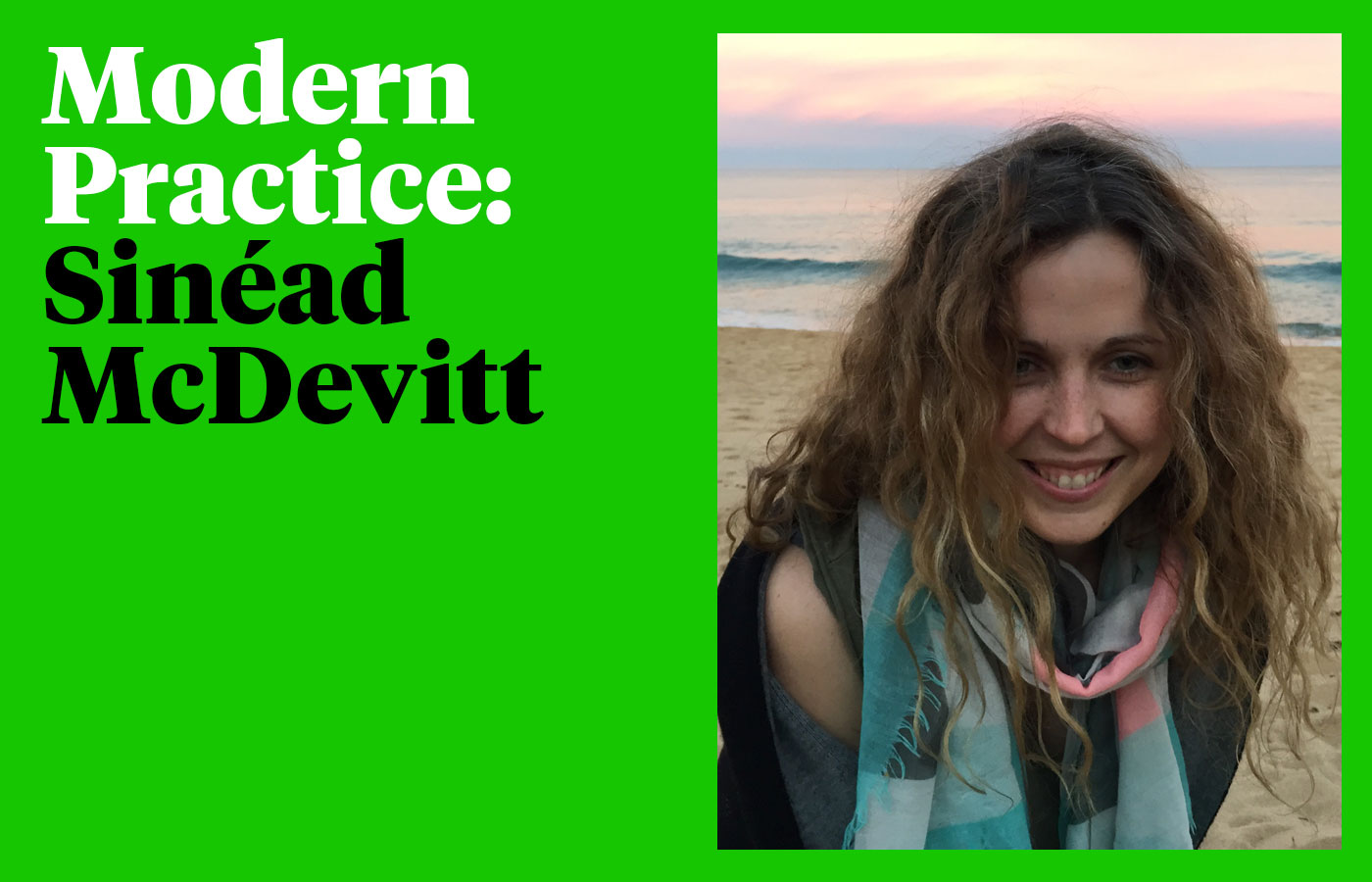 How did you get to where you are?  Balanced diet, daily exercise… No but seriously, in terms of where I am right now: I would say I got here by: – genuinely loving the challenge of a delicious creative brief (I get paid to come up with ideas and bring them to life!) – sharing the love and connecting with kindred spirits as a result – getting my heart royally broken two years ago (that kicked me into the world of documentary film; a fantastic adventure that continues!)

How would you define your role / practice right now? Freelance art director/designer and short documentary filmmaker.

Do you think that definition will change?  Not in the short to medium term, but quite possibly in the long-term. I've been freelancing in Sydney with communications agencies for 8 years now and it's only in the last year and a half that I've been making short docs. Still love design, so I'm looking forward to seeing what happens in the next chapter.

What do you set out to do with your work?  With design, I always set out to tickle/entertain in some way, whatever the subject matter or project-type. Pure aesthetics aren't enough for me. I try to make a message (however subtle!) stick in the mind longer than 3 seconds, before the next piece of visual candy distracts the eye. Ideally, the message decides to shack-up in the heart or imagination, refusing to budge... maybe even challenging the mind to change or open up as a result. A big call maybe, but it's the holy grail for me! And I def can't say I succeed every time. That's one of the things that attracted me to short filmmaking last year; the opportunity to help elicit an emotional response to a visual idea, albeit with a different set of tools to art direction/design. I now know that sensitive combination of picture, design, music + story has the capacity to really set-up camp in the heart, bypassing the rational mind entirely. The learning curve has been pretty steep and hard ("What the hell happens now!?"), but really rewarding at the same time.

What's your motivation?  • An allergy to housework. • The drive to use as much of my brain as possible to make a positive impact (and learn more about the world as I go). • The desire to do the kind of work that I care about (not just for the paycheck); work that helps foster positive connection between humans.

What values do you try and instill in your work?  Hmmm, that's a toughie as project-types are pretty diverse. But by and large I try to instill a sense of human-ness into my work. I'm not a huge fan of work that's more cerebral / elitist than it needs to be – and at the same time I love work that leaves a little bit of 'space' for the audience to fill in the gaps themselves. I think the most successful pieces of work are like really intriguing conversation-starters, where the audience wants to keep chatting… they want to know more. So I guess, with either design or film, I try to instill my work with clarity (zero vague-ness), respect for human intelligence (by leaving some space for them to make connections/associations themselves), openness and a dash of wit or humour where possible. Is this beginning to sound like a dating profile?

What is the main focus of your practice?  Freelance art direction/design and short film direction and production; working with communications agencies here in Sydney for the last eight years.

What is the scale of your projects?  Design: Mini scale (e.g. a poster) to biggish scale (e.g. holistic brand identities with all the usual touchpoints). Film: Short documentaries from 1 to 10 mins.

How many projects do you undertake a year?  Hard to say. I've never sat down and counted. But now that I've been asked…. they vary in scale… so I'd guesstimate anything between 10-20.

How long are your timelines?  Design: Mini projects: 2-4 weeks. Biggish projects: 2-5 months. Short film: so far; 3-8 weeks, depending on the # minutes, whether it's animation or live action and the budget.

Can you give us a sense of what your working week would be like?  Mon-Fri: freelance at Sydney studios on design + short film projects. Hours: 9am-6pm… unless there's a deadline, in which case 9am-9/10pm.

Also usually a couple of midweek evenings + Saturday mornings at the moment for  a multiplatform short doc series I'm developing called The Alchemy Project. The pilot episode, Ballsy, is currently doing the rounds on the film festival circuit. The Alchemy Project won a $10k award at the end of 2014 and I teamed up with Executive Producer Penny Robins shortly afterwards to work on development. The project was just recently selected for the Crossover Market at Sheffield Doc/Fest 2015, where we were matched with a range of potential international distributors, commissioning editors etc for meetings. Met some amazing people doing great work – fantastic experience. Now it's onto the next stage; securing finance. Film is a much slower world than design!

What type of outputs/outcomes do you deliver?  Very diverse. One month it could be a brand identity or campaign with application to the usual; website / publication / outdoor advertising / TVC / short docs / environment / packaging. Next month could be illustration or a branded environment.

Do the people you work with understand what you do / understand the value?  The design studios – I think so, as I've been lucky to stay gainfully hired by them over the years. Their clients – most of the time, yes. Happily, I've received positive feedback – via the account managers – so far. Sometimes, you'll get the odd client who doesn't understand the value though of hiring professional creatives. They tend to request ill-considered amends, often diluting an idea to within an inch of its life.

What do you consider a successful project to be?  Depends on how you define 'success', so on a purely selfish level; a successful project is one where I can't wait to bring the idea to life… or look at it again and again, once completed (GENERALLY a good sign that it will engage the audience on some level too). Ira Glass (This American Life) talks about relying on your taste as a good compass. I agree with him. You just know when something hasn't worked. Unsuccessful projects make you want to tuck them away somewhere, out of view. On a collective level; for me, a successful project moves the heart or nudges the mind of the audience in some way, however humble the movement/nudge. It answers the brief perfectly and makes a positive difference to the client and/or audience. It's exciting to see the difference measured through analytics / higher levels of engagement / bigger bottom line / positive reviews etc. Ideally, a successful project also manages to push the boundaries of visual culture itself – whether nationally or internationally – challenging us to think and experiment in new ways. But perhaps the pinnacle of success for a creative project is one that helps us simply be better, kinder, happier humans. Alain de Botton's 'Art as Therapy' is one of my favourite reads on the subject. He examines how art can be used to enhance our lives. Why shouldn't design and film be used for the same purpose?

What do you feel is the impact of what you do?  With design, sometimes (perhaps most of the time) I HOPE the impact is "Huh, that looks pretty interesting"/ "This is really easy to use and understand – cheers!" / "How can I find out more about this?". With the short docs that I've made so far, however, I feel the impact has been a slightly deeper emotional response. WIth this kind of storytelling, you have the opportunity (and challenge!) to take someone on a journey. It HAS to engage them on a deep emotional level pretty quickly – by poking out a giggle / a load of questions / a couple of tears. If it doesn't, you've failed to make impact – and they'll probably walk away and forget about it immediately. It's pretty black and white. I think filmmaking may have higher stakes than design, but I'm open to being proven wrong!

Whatever the creative project, I start pretty much every project by asking myself "WHY should people bother to engage with this piece of communication for more than 3 seconds? What value does it offer them? Why should they give a s**t about this, when there's other – potentially way more important things – to be concerned with?" In that way, I try to make sure I'm not wasting their time – and make the value clear, as soon as possible.

What's the most important thing to get right in order to do your job properly?  Listen. Ask. Listen some more.

Are you working the way you want to?  Right now – yes, for the most part. I feel I've discovered this other delicious world (film) to add to the already-delicious world of design. And I'm really enjoying the combo of both. (I was actually initially surprised by how helpful my training and practice as a designer informed the making of 'Ballsy', my first short film… in terms of problem-solving, art direction, keeping it simple and thinking with both left and right brain).

What would you change? Not a heck of a lot at the moment. But if no holds-barred, I'd probably say; in an ideal world, the freedom to cherry-pick only the plum-jobs! Maybe some day.