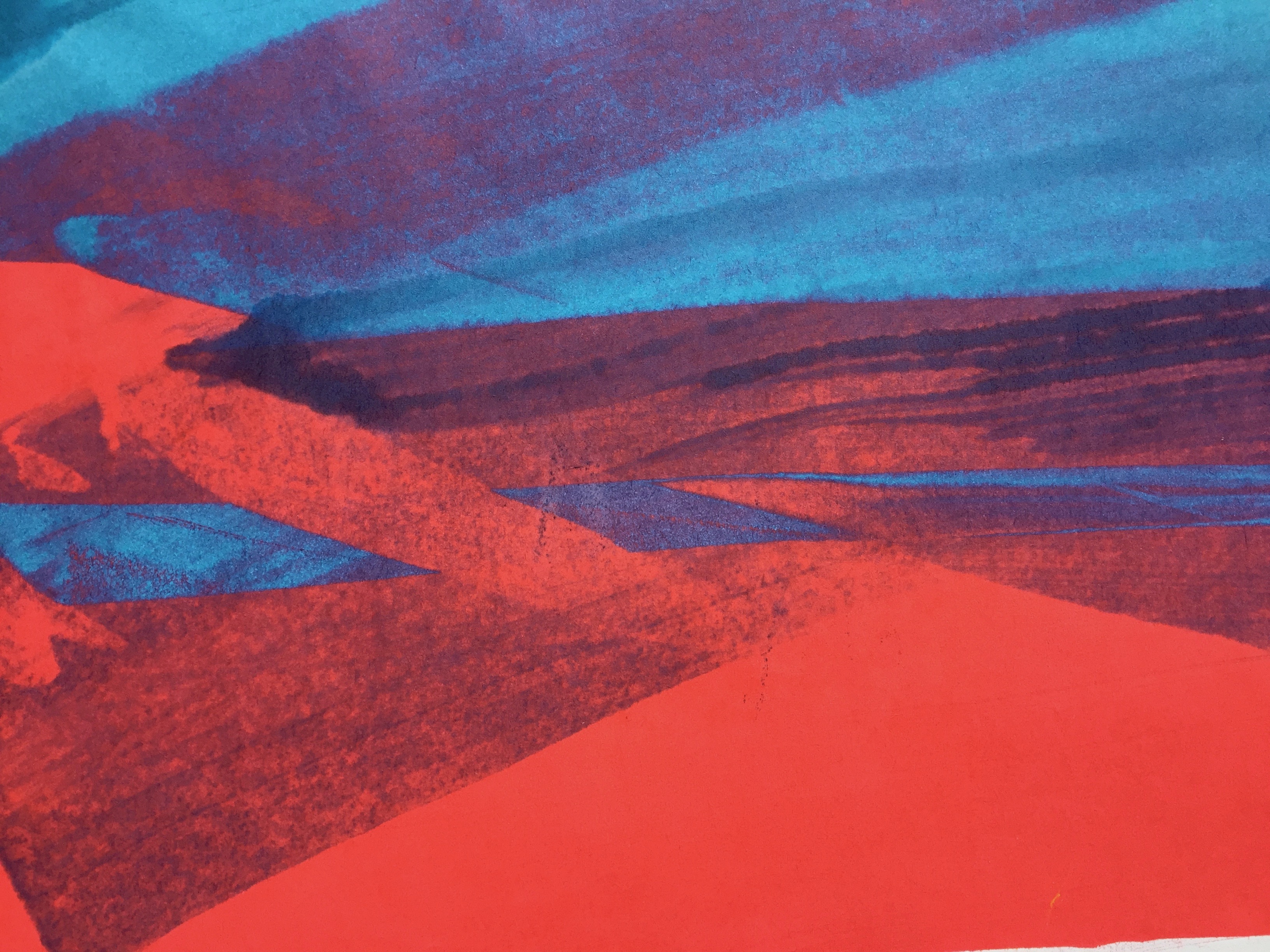 I am not a writer. I have no desire to be one. This is not a heavily researched or referenced article. This is a story. It is a short conversation about the idea of a studio, its purpose, how it lives and adapts.

The conversation happened outside the Red&Grey studio on Lennox Street. Three people were present, Stephanie, a barista, Julia, a print maker, me (Bob), a studio owner/partner. Towards the end, a fourth person, Lukas, a designer joined in. The discussion moved between the blurred lines of creative practices, interdisciplinary connections, technological incarceration and the importance of a good cup of coffee.

Walking past the window, Julia stopped, peered inside and watched as the four, five or maybe even six people stared at the computer screens, headphones on, eyes glazed over in concentration. Taking two steps back she looked up at the name displayed across the facade of the building.

“It’s a design studio” said Stephanie, standing in the doorway of her café “Want a coffee?”

The two sat on the street bench, coffee in hand and the began to discuss the importance and cost of artist studios and creative spaces in the city.

“It’s a pretty cool looking space. I’m stuck in a tiny space in an industrial estate in Kimmage. Sorry, I’m a print maker, by the way.”

“Are you on your own or do you share your place?”

“No, I’m on my own, well I have my dog Hooligan. I named him after Jack B Yeat’s dog. He’s great company. I’m just about on the edge of the city, so I can get out of the studio and into town as much as I’m in the studio. I think I’d go crazy if I was in on my own all of the time.”

Just then, one of the designers, Lukas, leaves Red&Grey, closing the door behind him, talking to himself as he walks off down the street.

“It’s mad, the more artists and designers are pushed to the edges, the fringes of the city, the emptier the centre becomes. I studied English and Philosophy, but could never find a job or career that I was suited to, until, that is, I learned how to make coffee. Unlike you, having to leave your studio to meet people, I need to leave my café to find quiet space. Although I can’t complain, this place is like an evolution of my education. Just meeting and chatting to people all day, it’s fascinating.”

“Howyee?” Bob from Red&Grey calls out as he pulls up outside the café on his bike. “What’s the craic Steph?”

“We’re just chatting about the importance of random conversations and how we need more of them. Sorry, this is …? I never got your name.”

“I’m Steph and this is Bob, he runs the studio next door with his mate Keith. Want a coffee Bob?”

“Please, thanks a mill. Yes, that’s our place, we’re going almost eighteen years. I could say we’re an interdisciplinary studio, but I’d be lying. Everybody says that, but nobody I know actually is. They may want to be, but they’re not. Anyway, I’m working from home at the minute, so I’m not in here much. I have two kids, so I have to wait for the new school term before I can get back in.”

Stephanie disappears inside, leaving Bob and Julia to continue the conversation.

“How do you balance it all?”

“Ahh, I dunno. You just find a way. I always believed a studio is where your practice lives, where you play, make and are free to learn through your experiments. With the kids I’ve probably been experimenting more in my work than I would have in the studio. My house is now where my practice is and my studio is split between two places.”

“Maybe your studio is wherever you are. If you’re comfortable in your space, you give yourself permission to be fearless in your work, consciously or unconsciously. That’s my own philosophy anyway as an artist. Sorry, I’m a printmaker by the way.”

“Did somebody mention philosophy? To get to the truth, you have to know the truth.”

“Yeah. It’s been great to be around the kids, they’re incredibly creative. It’s messy, but messiness is important. They have no formulas, no fixed processes, no usual approach. I’ve learned a lot from them. Their world is built around optimism.”

“I remain an optimist, because I’ve not found much advantage in the alternatives.”

“Thank you Steph the philosopher.”

“It was actually Garry Kasparov that said that, the chess player.”

“Art is about about depicting space and us in it. David Hockney said that. For me, my art, my studio has always been a means by which I can question, seduce, engage … Art for me is everywhere. I’m eternally optimistic. I have to be. There’s no such thing as the glass half full or half empty, there’s just the wrong glass.”

“Ok I’ll bite, I have quotes, as well you know. I’ve often felt that designers can sometimes talk themselves up too much, but I also believe we need to have confidence in our confidence. John Maeda said “Art makes questions and design makes solutions”. In there, (gesturing towards the studio), we endeavour to do both. To be successful you need the right environment, space, people, studio, the right attitude. Working from home I’m faced with lots of unforeseen challenges. Stuff I hadn’t considered.”

“For starters, everything takes longer, but not in a good way. Not in a, now I have the time to daydream, kind of way. There’s also no space for chance during online conversations. There’s no serendipity. It’s too easy for the work to become formulaic. You end up making more, but thinking less. Whenever I come in to the studio I want to lock away all the Macs, clear the space and just play, chat, smash the wrong glass.”

“There’s a neuroscientist in Trinity, Shane O’Mara who believes that getting people to engage in physical activity before they engage in a creative act is very powerful. He’s written a book where he talks about how plenty of regular walking unlocks the cognitive powers of the brain like nothing else.”

As if by serendipity, Lukas from the studio returns from his walk.

“Lukas, we’re getting rid of all of the desks. Get your dancing shoes on. And also, I’m burning all the headphones and smashing all the glasses. The future starts here.”

“The artist John Baldessari always said, if you were stuck for an idea, do something physical, sweep the floor, prepare your canvas. That way you distract yourself from the pressure of coming up with ideas, leaving space for new ideas to form. Anyway, I really have to run. I didn’t anticipate spending so much time here. It was lovely meeting you both, but I’ve got to get back and sweep the floor.

“Nice to meet you too. You know where we are for more chats”

“Cheers. I also know where you are for nice coffee.”

“Just getting back to what you were saying earlier Bob, that idea of having no fixed formula in how you problem solve. There are multiple types of problems, complex, chaotic, complicated, simple, clear. But the issue is we often and without even realising it, approach all problems with the same formula.”

“Is it not important to have your own Weltanschauung, your own singular approach?”

“It is Lukas, but sometimes, your own purpose and process can get in the way. I’m not talking about unravelling the rainbow. Sometimes the answer is a laugh, sometimes it’s unexpected or as Bob says smashing the glass.”

“Johannes Itten, from the Bauhaus believed we needed to continuously discover the world anew by refining our senses and seeing the contrasts and harmonies of the world.”

“The world is ripe for new ways to see and think about the world. The old normality was just a concept and nobody wants to go back to it.”

“Totally Bob. I know this from the conversations I’m having with my customers. Every day people are talking about, how can we make a better city? A greener city? How can we live our lives differently? Connect differently? Be more balanced in how we do things? Be on social media less? Daydream more?”

“Let’s not talk about social media. Lukas here, loves it.”

“Social media is great, but only if you don’t want to think. And you’re bang on Steph, we need new alternatives to so many things, new thinking around art, science, politics and design.”

“Well what are you waiting for?”

“Sounds like a no brainer Steph, but there is always resistance to change. There’s the this is the way it has always been.  And there’s always a deadline.”