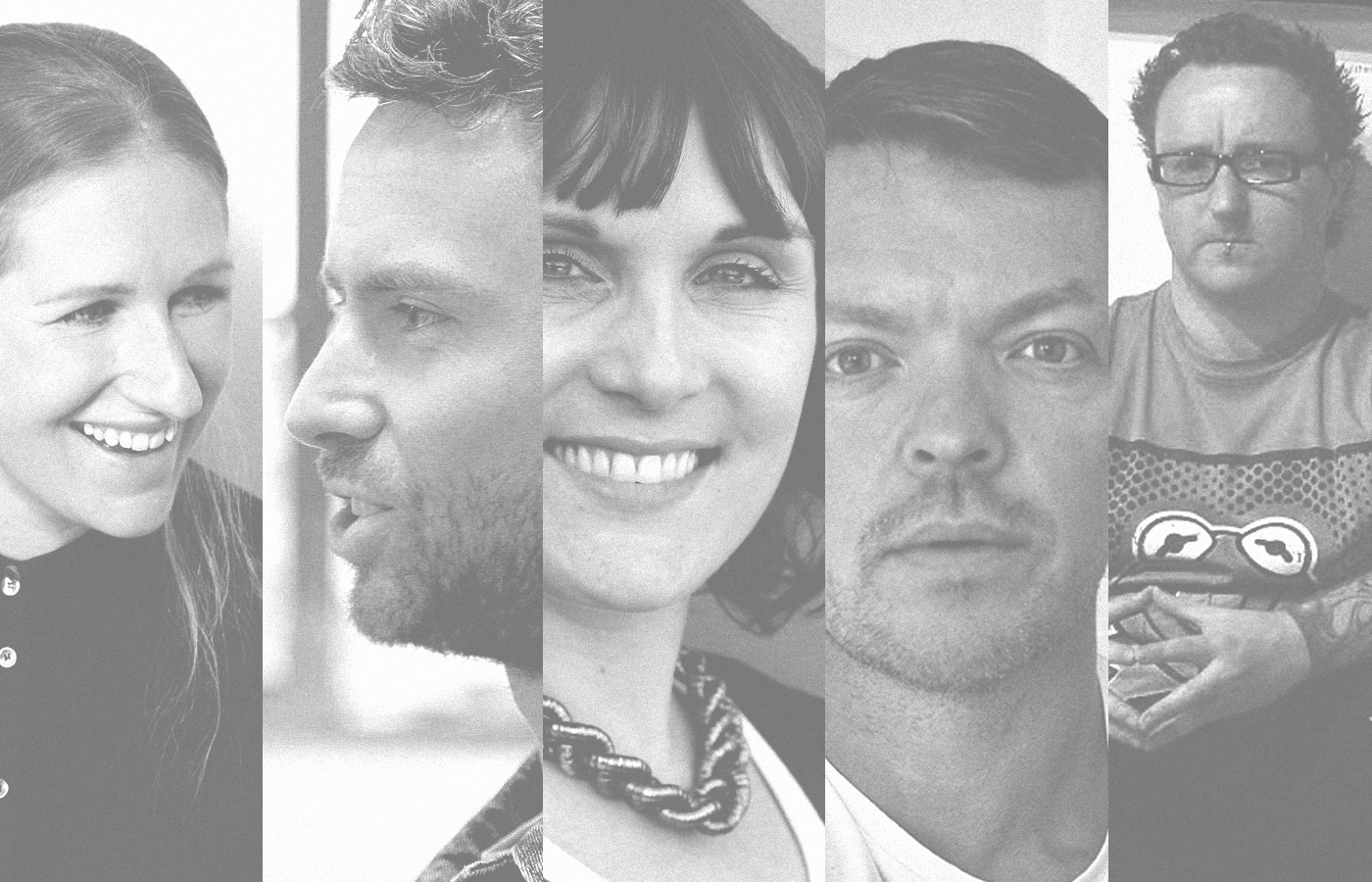 The Professional Panel – David, John, Lara, Simon and Richard –  have completed their task and have cut down in excess of 500 entries to the glorious selection of work we’ve all been admiring over the last three weeks. Quietly in the background the baton was passed last week to our new Archive panel who have started the unenviable task of selecting 100 projects deserving of inclusion in the final Archive selection for 2015. With their final deadline looming it’s time to reveal the colleagues who will carry the responsibility of assessing and evaluating the very best of contemporary Irish design over the next three years.

As with our inaugural panel, this new panel has a wealth of national and International experience. They represent the diversity of practice and experience necessary to provide a credible and objective assessment of contemporary Irish graphic and communication design. We are grateful for their commitment of time and expertise; and are enthused by their motivation; their feedback thus far; and dedication to the task at hand.

Naturally we need to recognise the great job done by the outgoing panel — Barney Whelan, Kathryn Wilson, Sue Murphy, Amie Norman and Kevin Finn who from 2012–2015 defined the standard that all future submissions will measured against. A sincere thanks to them all.

Cue the drum roll… and please welcome onboard…

Kasia Oźmin
Since leaving DesignWorks in the early noughties, Brooklyn, NYC resident Kasia has established an enviable indpendent practice state-side. A graduate of Design and Interactive Media in IADT she has since gone on to become an award winning designer in Ireand and the US – working for numerous acclaimed design studios including Mother NY, Anomaly, Yard NY, Number 17 and Quirky, before setting up her own studio Together We Create. Kasia has developed TV campaigns with Kate Hudson for Almay, partnered with (Product) RED & Penfolds on a kinetic typographic animation and worked with a wide variety of established and emerging businesses including The Hugh Lane Gallery, BT2, Treasury Wine Estates, Dell, Carlsberg, Revlon, Nonesuch Records and HelloArtists to mention a few. Notable achievements include designing two series of stamps for an Post, winning a shelf load of design awards, and having work featured in numerous publications including Creative Review and the Guardian.

James Cullen
International jetsetter and NCAD Graduate James is a multidisciplinary designer currently based in Amsterdam working within the areas of branding, experiential, editorial and digital design – with clients such as Nike, adidas Originals, Audi and HighSnobiety. Before making teh move to teh Netherlands, he was part of the small team at DesignStudio (London) who delivered the global rebrand for popular home sharing platform Airbnb. The project involved working extremely closely with their internal team in San Francisco, with him eventually moving there for half a year to help redesign their digital products. Pressed on what distinguished his practice James says his “motivation and dedication is to create what he considers contemporary, idea-led design” and produce work that is greatly informed by a lifestyle he is immersed in, one that embraces “ culture, style, running, music, travel and technology”.

Aoife Flynn
Our nominated client / design commissioner Aoife is Head of Audiences and Development at IMMA – the Irish Museum of Modern Art. Prior to joining IMMA in October 2015 Aoife was a freelance marketing and communications consultant in the arts and creative industries and a live music curator, having previously been Music Programmer and Marketing Manager at The Model, Sligo. Aoife believes strongly in the importance of good design, and the majority of her projects have had design at their core; largely through brand identity creation and application and website design. She has commissioned identity, print, advertising, online and digital design for a diverse range of cultural and creative businesses over the past fifteen years. She has developed or managed visual brand identity and its application for The Model, Sligo, The Creative State North West, Merrion Square  and Magnetism, and web design for Sligo Music, The Creative State North West, MCO Projects, and Tyrone Guthrie Centre. Aoife holds an MPhil in Cultural and Creative Entrepreneurship from Trinity College Dublin / Goldsmiths University.

Eamon Spelman
A longstanding supporter of the 100 Archive, Eamon “cut his teeth” with us as a member fo the professional panel from 2012–2015. Now a valued contributor to our editorial team we’re delighted that he has committed to deepen his association through this additional role. Graduating in 1993 with a Diploma in Visual Communications from Athlone Institute of Technology and was subsequently awarded a BDes in Graphic Design from Limerick School of Art & Design in 1995. After graduation, he moved to London, where he worked for a number of years in editorial design, before moving back to Ireland to work with a Limerick-based agency. He became their Creative Director in1998, before leaving to start up his own agency in 2000. The same year, he took up a part-time teaching post on the Visual Communications course at LSAD which, two years later, became full-time. He completed an MA in Visual Communications with the National College of Art and Design in 2006 and, in 2010, he took over as course co-ordinator at LSAD. Actively involved in the design community, he is a member of the Institute Designers Ireland, the International Society of Typographic Design.

Paul Woods
Last but my no means least “Paul the Designer” who has been busy this past month for us – tapping out our new column Sustainable Work from his new base in NYC. In his new role Paul is an art director at HUGE.  Prior to that he worked as design director at Edenspiekermann, Berlin. He creates work for clients including Red Bull, Google, Morgan Stanley and Nescafe. His work has won several awards and is regularly featured in international publications and blogs. He is a member of the Awwwards website jury. Outside of his agency work, Paul tells us that “he likes to draw offensive pictures of himself (often in the nude)” and runs the satirical website Adloids alongside his design commentary for various publications here and abroad.

Pssst… He hates text that is written in the third person.