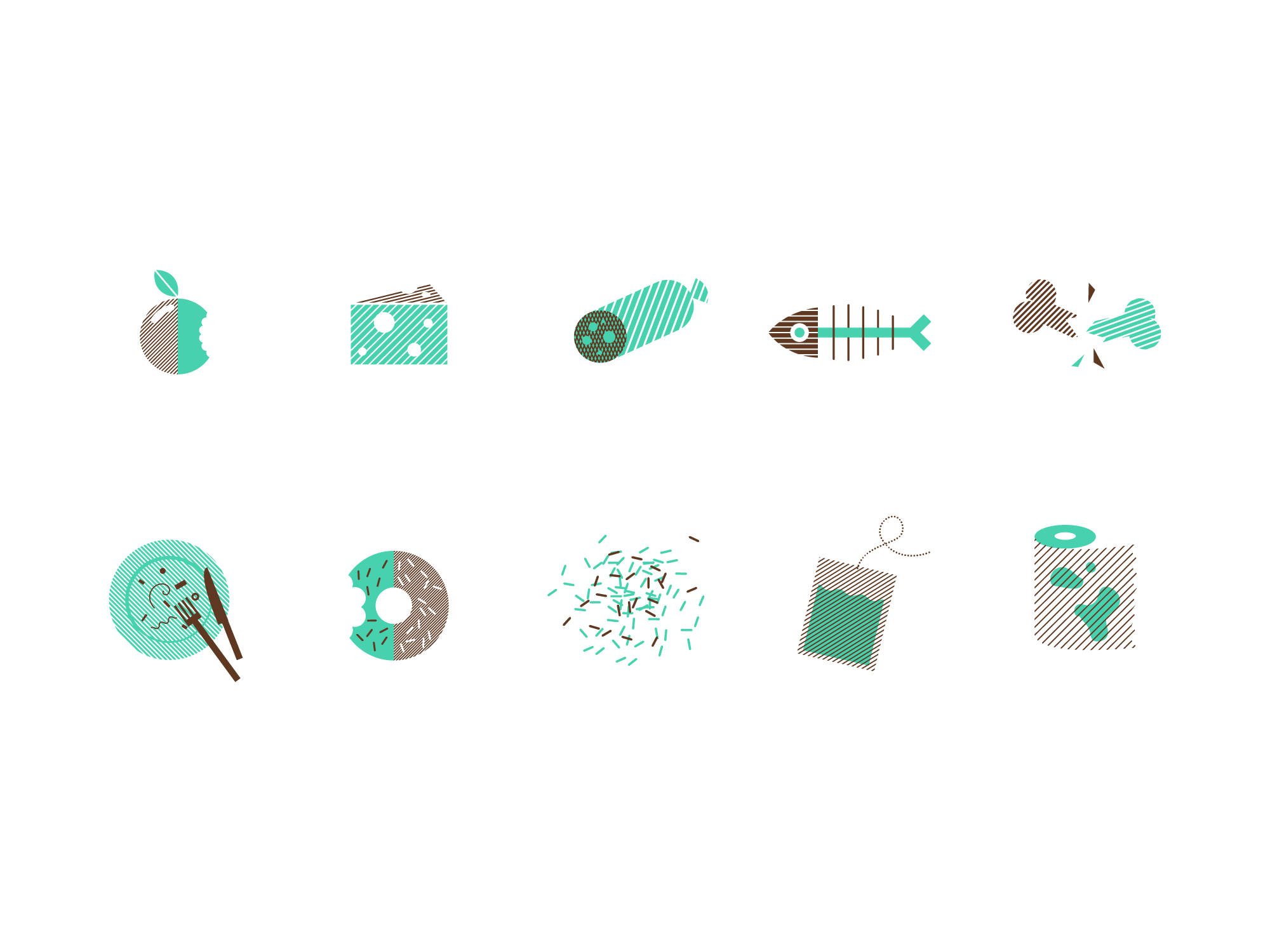 As a trend, a term, a movement, sustainability is fast becoming ubiquitous as we collectively examine our consumer choices and environmental impact. It’s therefore no surprise that we’ve seen it emerge within the 100 Archive in recent years where 56 pieces relate to the theme, with a whopping 40 of these relating to commercial clients. A total of four projects tapping into sustainability themes appear between 2010-2012 and increase to 14 in 2018, increasing more than ten-fold.

Reassuringly, there’s a broad spectrum of projects and clients directly dealing with issues around sustainability and using design to effectively further the message. The issue of sustainability manifests most significantly in relation to energy as well as food production and ethical sourcing but we see other examples too.

There are projects that didn’t necessarily employ the term ‘sustainability’ in the early years and yet very much touched on issues surrounding it. Ark’s ‘Exhibit Me’ visual art season, designed by Aad, all the way back in summer 2010, comprised a series of workshops and an exhibition with the focus on the creative possibilities of a wide range of everyday materials. At the time, this was tapping into the post-Celtic Tiger upcycling trend. In the intervening years, organisations such as the Rediscovery Centre in Ballymun and Recreate in Ballymount have sprung up to encourage the creative use of everyday objects in a more permanent way, promoting the circular economy and its sustainable advantages.

The use of materials is key to many of the craft and artisan produce examples we see in the 100 Archive too. The naturalness of wool and Ireland’s longstanding craft relationship with it is echoed in the aesthetic of Neworld Associates 2019 Ireland’s Eye brand, as well as in the use of organic and recycled materials comprising the catalogue itself. Déanta and Edge Only from Aad share a philosophy based on made to last, quality materials and timeless design. The importance of materials is further exemplified in the use of a paper made from waste beer product - who knew? - on which Déanta’s core communication suite is printed.

Beauty brands pay homage to Ireland’s wealth of natural materials, with Kinvara (David Fitzpatrick, 2016), Atlantative (Cassie Wright, 2017) and Moss of the Isles (Wilson Creative, 2018) conceptualising both their sense of place and nature within their brand, product ranges and graphic design. All three use place within their brand name and all three use native or naturalised Irish plants in their products like rose hip, heather and seaweed.

The abuse and depletion of the earth’s resources and natural materials form the crux of the environmental crisis we now find ourselves in and Ireland declared a climate emergency in May 2019. The future of water was explored in the Science Gallery’s beautifully named exhibition and accompanying catalogue from 2011, Surface Tension. This was a few years before Irish Water was registered as a company and before any work addressing climate change and sustainability of the earth’s core resources appeared in the 100 Archive from corporate quarters. When they do, it’s clear that Irish energy and energy-dependent companies are responding to the necessity for change.

DAA with their Sustainability Update 2015 (Image Now), Bord na Móna (RichardsDee, 2016), Clearpower (Alkamee, 2016), Ervia (Webfactory, 2017), Gas Networks Ireland (Webfactory, 2017) and SEAI (Webfactory, 2017) all engaged design studios to improve communication in recent years. There’s an impressive convergence of Irish tech, innovation and social entrepreneurship in relation to energy sustainability held within the 100 Archive aswell. Consensus (Detail. Design Studio, 2014) re-frame the challenge of sustainable behaviour change as a challenge of transforming how we carry out everyday practices. The Home Performance Index or HPI  (Danielle Townsend Design, 2015) is Ireland’s first national certification system for quality and sustainable residential developments. UrbanVolt (Atomic, 2016) are a Dublin based tech startup that aim to accelerate the world’s transition to sustainable energy. Ireland 2050 (New Graphic, 2016) meanwhile, promotes Ireland’s goal of cutting emissions from electricity generation, buildings and transport by at least 80% by 2050 by being an educational tool that informs and empowers people about our energy use. It looks at our energy history from pre-history to today, answers topical energy questions with referenced, science-based answers and through an energy policy calculator or game lets the user make policy decisions and see how they effect our C02 emissions, productivity and the economy. It’s all pretty inspiring stuff.

There are additional projects directly addressing social change in this area, Team Human (Zago, 2017) provides a set of resources enabling human intervention in the economic, technological, and social programmes that determine how we live, work, and interact. As they say themselves, ‘This is media as cultural resistance and a path to social change’. Change by Degrees (Chapter, 2018) is a social enterprise founded by two open water swimmers whose mission it is to change the way we produce and consume products and services. They are committed to a new way to live on Planet Earth, by changing the conversation from ‘Do I have to?’ to ‘Where do I start?’

It is through food producers and businesses that we really see a language around grass-roots  (pun intended) sustainability practices develop, however, with restaurants, farms, festivals and cookery schools all making an appearance in the 100 Archive. Food waste is even dealt with through A-ok’s identity for Obeo. Businesses that address issues of food sustainability and more ethical and environmental agriculture methods appear to be on the ascent and a clear relationship between producer and consumer is discernible through restaurants such as Camden Food Co. (Zero G, 2013), Murphs Steakhouse (Sans Studio, 2014), Loko Restaurant (TrueOutput, 2014), Loam (New Graphic, 2015), Cocu (Revert Design, 2015), Pudding Row (Red Dog, 2016) and BuJo (Aad, 2017). All of these restaurants are committed to seasonal, local produce so it’s no surprise that some of these family-run farms and food producers feature too - Hell’s Kitchen (Aad, 2012), Hanley’s Foods (Greenhouse, 2017), Healy’s Honey (Greenhouse, 2018), Hey, Honey! (Studio Yay, 2018) and Keogh’s (Open, 2018). Some of the food producers display a strong social enterprising spirit, too. The Connemara Apple Project produces Connemara Craft Cider (Detail. Design Studio, 2017) from an orchard pollinated by the grower’s bees and fertilised by his chickens. Neighbours and friends provide any shortfall in apples to maintain production. This neighbourly approach is exemplified by NeighbourFood (Wilson Creative, 2018) which is an online platform enabling consumers to purchase directly from local farms and food producers.

Remarkably, given that the restaurant business, in particular, is not known for its longevity and that some of these projects developed in the depths of the economic downturn, all of these food businesses are still operational and appear to be largely thriving. Sustainable in more ways than one, it seems.