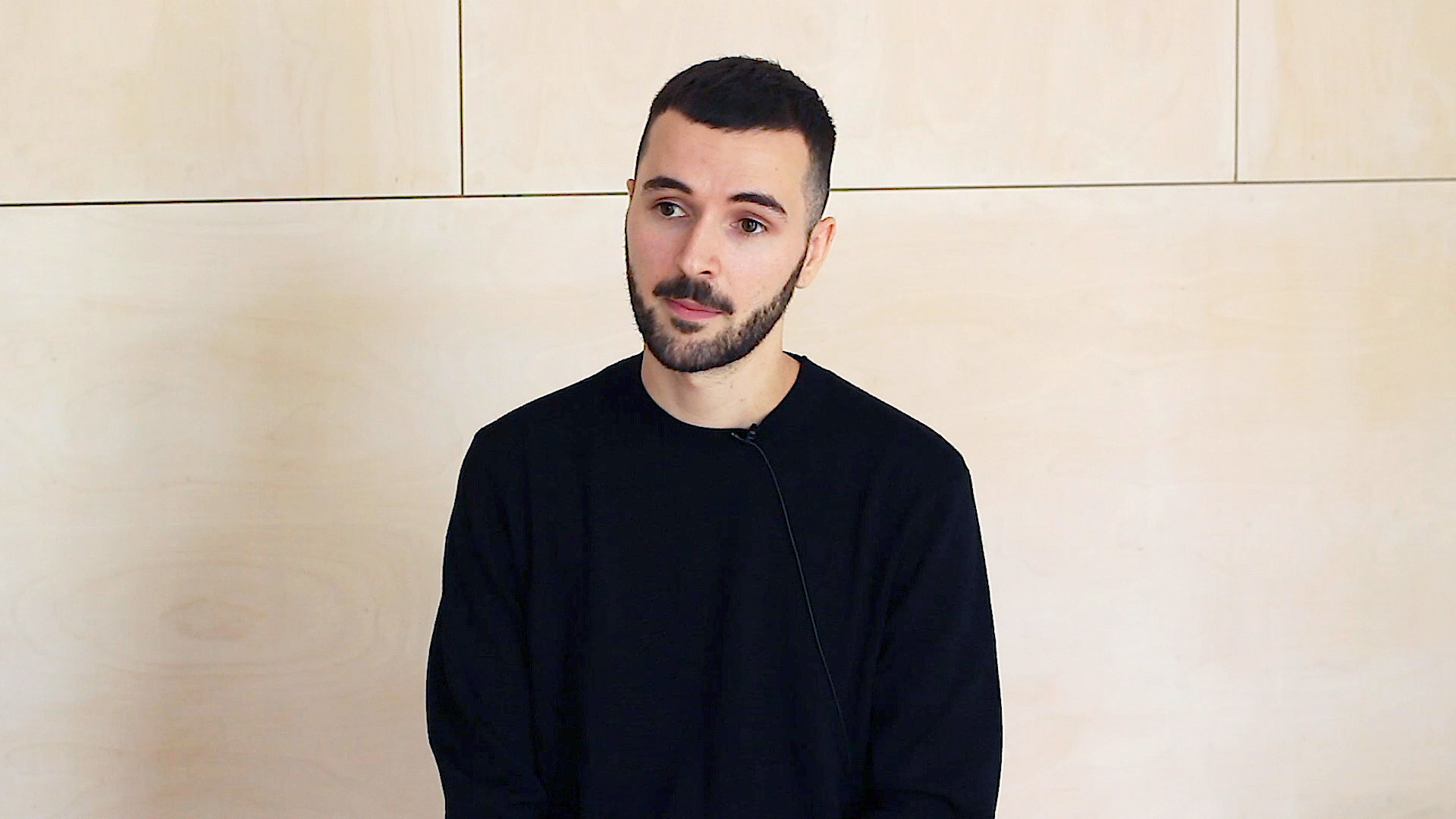 While he was on a flying visit home, we caught up with Rory Simms, designer in Pentagram NYC. He talked to us about his education in IADT, his move to the States and the work he’s most proud of. Watch the video clip or read the full interview below...

Can you tell me when you first became aware of and interested in design?

Of course we've always been surrounded by design, but I think I became aware of design, without yet realising it was design, at the age of 12 or 13. Starting in secondary school getting into music and bands, the Che Guevara image and the Thin Lizzy logo – stuff like that. Sketching on copybooks and buying T-shirts. I didn't know that was really graphic design at the time but I guess that’s how I got into it.

Where did you study, and how was it?

I studied Visual Communication Design at IADT in Dún Laoghaire and I graduated in 2013. I had a really positive experience there, it was a stark contrast to the secondary school system. The setup in IADT is very much like a working environment, a studio setup. So everyone has a desk and you go in, sit down and do your work from 10-5, and it’s five days a week as well, so it preps you for the real world of work. I know it’s quite different from a lot of other education systems, especially in the States, where you go to different classes with different teachers. You have the same set of teachers for four years who come around to your desk and ask you about your projects and give you feedback, and then there'd be a presentation at the end of it all.

In college in the States people minor in other subjects and major in the field that they want to work in, so it’s quite different. For the first couple of years it’s like a continuation of secondary school. But now I'm at the School of Visual Arts in New York teaching graphic design seniors (fourth years), and the set up I have with them is very much like IADT. My co-teacher and I give them a brief and then they spend three weeks working on that, there’s a weekly check in, and a final presentation at the end of it.

Does your Irish education, or your Irishness itself, help you with what you do?

Thats a good question! Well, living in New York in particular, it’s an extremely international part of the States, a little different to the rest of the US. So even in my workplace, Pentagram, it’s hugely diverse, it’s not full of Americans. On my team there have been people from Japan, Germany, Sweden, Korea... A lot of people have to face a language barrier, so luckily I didn't have to face that. And I guess there’s a fondness for Irish people all over the world really, so it’s easy enough to work my way in there.

What steered you Stateside?

To be honest, I had my heart set on New York even before graduation. I had done a summer internship at a studio called Hinterland in New York in 2012, and from doing that internship and seeing NY for the first time I had it in my head that I wanted to finish college and then get back over as soon as I could. So I graduated, did a little freelance work for a couple of months to save money, then went straight back over and have been there for the last six years. It had nothing to do with the climate at the time for design in Dublin. Having already been and already having done some work there and needing to grab a J1 visa while I still could, I just had to take the opportunity while it was there.

I arrived without having done any sort of extensive research or having gotten in touch with people, which is what you should do really… But my friends and I arrived and spent the first couple of weeks just trying to get our bearings, trying to find a place to live, trying to furnish it with whatever we could. I already knew Ken Deegan who was working in Pentagram, so I shot him an email, you know, ‘I’m in New York and if there’s anything going let me know’, and he emailed me back and said Paula Scher’s team was looking for an intern so I did an interview and I got the gig. The first interview, first email, very lucky...

Designed by Rory Simms at Pentagram)

How did the visual language of New York influence you, particularly compared to the low key city you came from?

New York’s visual language definitely influenced me, but I think its on a very subconscious level. When I first arrived, everything was so new to me: I always tell people that the first year in NY seemed like it lasted five years, and the five years since seem like one... So as soon as you get settled that visual landscape becomes the norm and I think it seeps in a little more subconsciously. It’s interesting that you say that Dublin is low key, but I’m getting the reverse effect now. Whenever I arrive back, it’s clear that it’s got a strong visual language of its own, but it’s only having been away from it for a few years now that I really get a sense of it.

How would you describe the scale, structure and culture of Pentagram?

Pentagram is the world’s largest independent design studio, but it’s essentially a partnership. There are 23 partners internationally, eight of which are in NY. The company started in London in 1972, and then they opened a NY office in 1986, and there are a couple of other offices around the world. In NY each partner operates their own team and have they own clients and they each came into Pentagram at different times and for different reasons, so it kind of operates as eight small studios under one big name. Although there are 105 people in the office I only deal with about 6 people on my team. The partner I work for is Paula Scher and she has her own style of working. She divides her work almost 50/50 between big corporate and cultural projects, that Robin Hood technique that a lot of people like to employ where you do higher-paying corporate projects in order than to do lower-paying cultural projects. Maybe you have less control over corporate projects because there is a lot of bureaucracy, you have to sell an idea through a hierarchy of executives. In contrast, when you’re working for a cultural client, maybe on a lower budget or pro-bono they are delighted that they are getting the services of an internationally recognised design studio and so they are very open to whatever ideas we might have.

Were you starstruck when you first started working with Paula Scher?

It was definitely a little bit intimidating stepping into that office for the first time and working with Paula for the first little while, but you're just thrown in the deep end there so you have to adapt your starstruck-ness pretty quickly. And the way that Paula works with the team, and with me, even when I was an intern, is very direct. It’s not like you'd have to go through 10 people to get to her, she would just come over to me in week one, slap a sketch on my desk and say, ‘Make this!’

Designed by Rory Simms at Pentagram)

Tell us about the work you make there.

With the work being split and the creative control you sometimes have with cultural projects, they often end up being the ones that I’m most proud of, though I'm definitely proud of some of the more corporate jobs I’ve done as well. But that probably explains why many of the projects I've submitted to the 100 Archive have been cultural in nature.

The Quad Cinema project was one of the first projects that I was the lead designer on, along with the team and Paula as Creative Director. That project began at the end of 2014 so I'd been in Pentagram for 9 months or so, and it was a big responsibility being thrown at me. I was eager and delighted to get that opportunity, but it went over the course of two and a half years. Graphic design projects are typically a little bit quicker than that, but a project that involves signage or environmental graphics, like a lot of the projects that I do, goes in tandem with the architecture of the building, and that can take time.

Atlantic Theatre is an ongoing client thats been a really rewarding client for me. Although the rebrand happened in 2015, every year since then we've redone their seasonal campaign and every year we do something new and fun. We just put out their 2019/20 season and there’s a lot of trust that has developed over the years: they come over for the annual meeting and talk about what shows they are doing next season and we start throwing out ideas straight away. It’s a great way to work and it’s a good client relationship.

Are you an audience member in these places too, and if so, what’s that experience like?

While I was working with the Quad Cinema I designed their complimentary passes and I made myself a permanent free pass which I made them sign and laminate… When I’m there I’m able to enjoy it for what it is rather than start assessing the design. I think in those two cases especially, because the main event is going to be a movie or a theatrical production you’re distracted pretty quickly from your surroundings.

Tell us a little bit about using the 100 Archive for things like maintaining links to the design community here.

The 100 Archive is a great way, particularly through the articles, to get a sense of people’s opinions on design in Dublin and in Ireland. And I find it’s really nice to feel like an Irish designer abroad rather than just a NY designer. The 100 Archive keeps that connection and strengthens it, because Ireland obviously has a diaspora all over the world, people are traveling and getting experiences and sometimes bringing those experiences back to Ireland and helping to enrich the design culture here. I think it’s important to keep the ties to that diaspora and I think the 100 Archive is doing a good job of that for graphic designers.

So, finally is there any voice in the back of your mind drawing you home?

I think there’s always that voice to some extent, and it’s great to come back here for trips when I can, but I feel like my work is not totally done in New York. But who knows!